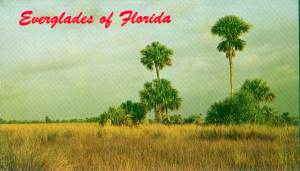 When I was in my early twenties, I did some work for a family friend who owned a land surveying business.  I was often sent out on jobs with my friend, Mark [name changed for privacy], a tattoo-laden, once-marine-always-marine, who was going through a bit of a hippy phase complete with long hair, long beard, and a VW bus.  One of our most memorable jobs was staged in the Everglades, and I would soon discover that this was not the same Florida that I called home.  Our hotel was the only structure we had seen for miles, and I had fully expected a poorly maintained shanty run by a fellow named Jed with overalls and half a set of teeth.  However, what we found was an incredibly lavish and magnificent resort made increasingly ominous by the hundreds of buzzards perched on the castle-like structure and all around the premises.

To say that the words, “out of place”, were coined for this hotel would be as fitting as to say the words, “middle of nowhere”, were coined for its location.  We would thereafter refer to it as the Hotel California after the famous Eagles’ song, as upon entering the lobby and seeing the massive stone fireplace that rose several stories to the full height of the hotel, we were certain that once we checked in, we would never be allowed to leave.  The role of Jed was played by a remarkably becoming woman with an all too welcoming smile.  When we asked for a room, she replied, “Which one would you like?”  As this was a question we weren’t familiar with, Mark responded, “What do you have available?”  “They’re all available” she replied with the same smile.

Exchanging nervous glances with me, Mark said, “You know, we will be getting up and leaving very early.  Maybe, it’s best if we get a room next to an exit so we don’t disturb any other guests who show up.”  “Oh…there won’t be any other guests” she replied, her smile now becoming increasingly disturbing, “Wouldn’t you prefer a room on the top floor with a better view?”  Mark looked over at me.  I was shaking my head “no” until I saw her eyes cut over in my direction, and I stopped and smiled…nervously.  “Nope, we’ll stick to the first floor…near an exit” Mark replied, much to my relief.  Not Jed was still looking at me, and I held my smile until she looked away.  Then, looking at Mark with raised eyebrows, I slowly released my breath that I’d been holding for too long.

After entering our room and applying every lock to the door, we shoved a chair under the doorknob and checked the room for secret passages.  Every now and then, we’d quickly glance over to the portraits on the wall to make sure the eyes weren’t following us.  When we finally settled in for the night, we both slept with one eye open on unbelievably comfortable beds.  When we arose before daylight, we slipped into the kitchen hoping to find a bagel or two.  We were met by a young, impeccably dressed waiter asking us to please be seated and what would we like for breakfast.  “What do you have?” we asked.  “Whatever you want” was the disturbing reply.  Sensing our apprehension, he added, “We have eggs, bacon, biscuits, toast, pancakes, coffee…” he continued, but I was panning the room for an escape route.  “Sure, that all sounds good” we said…nervously.

The food was prepared and presented with magnificent flair.  The flying dishes and the singing candlestick were a bit strange, but the food was excellent.  Much to our surprise, it wasn’t laced with arsenic or sleeping potion, and we weren’t asked to pay with a lifetime of servitude.  The staff explained to us that they made their living off of a nearby annual Swamp Buggy race, and they seldom ever saw a guest in between.  We were allowed to check out and go on about our business, and we wasted no time in departing.  Sure, everything seemed okay, but I wouldn’t have accepted any tour of the cellars.

Thinking we could encounter nothing more strange than the experience at the hotel, we set off to find our benchmark.  Not the swampy, wooded everglades I was expecting, I found myself surrounded by miles of dried, brown grasses with more of concern for rattlesnakes and panthers than for gators and other swamp dwellers.  We hadn’t seen another living creature outside of the hotel besides buzzards and yellow flies.  We were surveying for roadways, for whatever purpose I couldn’t imagine, until out of nowhere came an Asian tourist couple in a well-detailed Accord.  Parking directly in front of us, Mrs. Tourist stepped out of the vehicle looking like she had just left Disney World and began attempting to ask us for directions.

Really, the question was presented with one word.  As we would eventually discover, the couple was looking for an airboat tour.  Mrs. Tourist kept repeating “airboat” over and over with what sounded to our untrained ears as “airpoat”.  Mark repeatedly attempted to explain to her where the nearest airport was, while she only shook her head “no” and repeated, “airpoat”.  Standing in this desolate place, watching Mark now pretending to be an airplane in flight complete with arms held straight out like wings and making propeller noises with his mouth while Mrs. Tourist continuously repeated “airpoat”, I thought to myself, “Yep, I’ve completely lost my grip on reality.  There’s the evidence…right there.  What was in those eggs?”  I turned to a buzzard who had perched on the hood of our truck to watch the show and asked, “What’s going on here?”  He just shrugged and looked at me as if to say, “Don’t ask me.  I just do the cleaning.”

A couple of years ago, another friend asked me if I would like to join his team for a brief trip to help find and capture pythons in the Everglades and release them in a more appropriate location.  I immediately thought back to my time spent there with Mark.  I also recalled a time when he and I were surveying one of our local creeks after a heavy rainfall.  The water level was unusually high, and the tannic acid levels had turned the water a rust color that made it difficult to see through.  We were waist deep in the creek when what I believe was a Copperhead snake swam directly in front of us.  Before I could react, Mark quickly rendered it a no-head with one swift stroke of his machete.  It was a bit like watching someone break through several layers of stone with their bare hand.  I stood for a moment in disbelief with my mouth agape before it suddenly occurred to me that dry land was immediately desirable.

Thinking back on these things, I responded to my friend that this didn’t sound like an enjoyable activity to me at all.  However, not long after that, I found myself sitting in my office wondering if I should have gone along.  The last time Mark and I were standing on a pile of garbage, surveying a landfill once again, I said to myself, “It’s time to get a real job.”  But, sitting in my office, looking at the latest data for a report that was already overdue, I couldn’t help but wonder if I wasn’t missing out on life’s true adventures.  The fact is most of my best stories come from the brief time I spent land surveying.  After years of office work, will anyone care to hear about the many paper jams and unreasonable deadlines?  “Hey Grandpa, tell us again about the time the power went out, and you lost the last 30-minutes of work on your report.”  So, maybe I’ve had it wrong.  Maybe it’s my friends from the East who had it right all along.  Perhaps it’s time I was a visitor on their side of the world.  Or…who knows?  I might even head back to the Everglades and have a go on an airpoat…

9 thoughts on “Is This Real Life?”

My Meals are on Wheels

Life and Cooking from a Wheelchair

Travel & Lifestyle - Come and Disover the WORLD with me!

“Poetry is a deal of joy and pain and wonder, with a dash of the dictionary.” - Kahlil Gibran

Poetry and Paintings by Niharika Jaiswal

Just exploring what it is to be human.

Never worry about where to eat again!

If I knew you were coming I'd have baked a cake...

Thinking with my Fingertips

Cooking with a Wallflower
quiet and creative

Diary of the creation of Bluestem Pond Farm