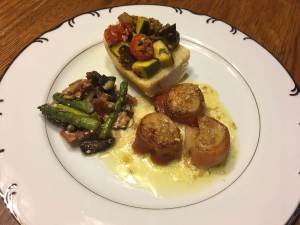 I cooked a birthday dinner recently and wanted to try for something really special.  I had decided to go with scallops topped with finely chopped pumpkin seeds in keeping with the season, and as a bit of a last minute addition, I decided to wrap them in bacon (because…why not?).  Why does everything taste so much better with bacon?  I don’t know.  It’s just one of those things without an answer, like…why did Chumbawamba only have one hit song?  Anyway, just add the bacon and stop asking questions.

The trick with a great scallop-based meal is to find something to accompany it that will blend but not become too much of the same thing.  Have you ever left a seafood restaurant feeling queezy because everything on your plate was either battered and fried or soaked in butter?  I suppose you could order the rice pilaf and steamed broccoli…but then…I suppose you could listen to Chumbawamba’s other songs.  They’re just about as fun.

I’d been trying to think of a way to bring asparagus back to the table as we’d grown tired of it, and I found a combination that really works.  We’ve had it a couple of times now with different meals, and it has proven to be respectably versatile.  Given how they are sold, all of the ingredients should have ample leftovers with the exception of the asparagus and maybe the bacon (especially if you have a housefull of hungry bacon thieves).  They also keep fairly well, so it’s easy to grab some fresh asparagus and go for another round.

Wanting more vegetable content for the meal, but also wanting something that would play nicely with the scallops and asparagus, I decided on eggplant.  I haven’t done a lot with eggplant, so the trick was finding a recipe that would compliment the rest while avoiding anything battered and/or fried.  I finally found a great fit [see original recipe here], and though I didn’t stick to the recipe completely, the end result was exactly what I was hoping for.

One of the beauties about this trio is that they provide an adequate balance while maintaining connecting threads.  The bacon and pumpkin seeds from the asparagus connect to the same in the scallops, and the butter and shallots in the scallops connect to the same in the veggie garlic bread (a bit like playing Dominoes).  As an added bonus, if you use the same wine for the meal that you use in the white wine sauce for the scallops, you have a built-in wine pairing [You might want to pick up an extra bottle in case you drink all of the first one while cooking].

SAUCE TIP:  I followed a recipe for the white wine sauce [see original recipe here], and I sorely underestimated the time needed to “cook until liquid is almost evaporated” and “let boil down until reduced by half”.  You will need the estimated 20 min. cook time and then some, so be sure to get this activity started at least 30 min. before everything else is done.  Also, the heavy cream and wine are a bit like oil and water, so you definitely want the white wine/vinegar to be “almost evaporated” before adding the cream in order to achieve the most even consistency.  However, if you rush the first step (as I did), don’t worry.  Just give it a good whisk before serving.  They taste is still excellent, and nobody will notice any flaws in consistency.

ASPARAGUS TIP:  I don’t like cutting asparagus on the plate.  I prefer to snap them in half during prep at their natural breaking point (roughly in the middle).  I compost the bottom half, and use only the top half.  Depending on the size of the stalk, I will usually cut the top half again to be sure it can be handled in one bite.

MEAL TIP:  This is not an average weeknight meal as it is fairly time consuming and potentially expensive.  However, I highly recommend it for a special occasion and could see it working well for a date.  If done well, it’s sure to impress.  So, give it a try.  You won’t be disappointed.

1 medium tomato – peeled, seeded and chopped [I used the equivalent amount in Mini San Marzano tomatoes without the peeled and seeded nonsense]

Cook bacon (whole slices) in frying pan and save grease.  Set bacon aside to let cool.  Light grill [or preheat oven to broiler setting if you prefer that sort of thing].  Wrap sides of scallops with bacon and hold together with toothpicks [Chop remaining bacon and set aside for asparagus].  Place scallops on pre-soaked cedar plank(s) [avoid overcrowding], and place in covered grill [do NOT place directly over fire].  In a medium saucepan, combine white wine, wine vinegar, and 1 tablespoon finely chopped shallots [set remaining shallots aside to use with veggie garlic bread].  Cook until liquid is almost evaporated, approximately 1 tablespoon left.  Stir in heavy cream and let boil down until reduced by half.  Stir in butter 1 tablespoon at a time, allowing each to melt before adding the next [set 2 tablespoons aside for bread and scallop topping].  Keep warm while preparing the scallops.

Place 1/8 cup bacon grease (or olive oil) and chopped shallots [leave one tablespoon (finely chopped) aside for white wine sauce] in a large skillet. Fry (stirring occasionally) over a medium heat until the shallots are softened; approximately 2 minutes.  Add eggplant and zucchini to the skillet, fry until the eggplant is brown and tender; approximately 5 to 7 minutes.  Add the tomato chunks and turmeric to the skillet, stir the mixture until the tomato becomes a pulp [this will not happen if you use the Mini San Marzanos, but they will soften and shrivel a bit]. Mix in salt, oregano, and basil. Stir the entire mixture over the heat for 2 minutes, then remove pan from heat, transfer the mixture to large bowl, and let cool.

Preheat oven to 325 degrees F (165 degrees C).  Slice the bread into 12 (1-inch thick) slices. Distribute garlic powder and butter evenly over the top of each slice. Place the slices directly onto the oven rack (do not use a cookie sheet, the bread will get crisper this way) [I use a cookie sheet…I burn myself less and say fewer dirty words this way].  Let the bread heat for 5 to 7 minutes.

Using the same skillet, add remaining 1/8 cup bacon grease (or olive oil) and asparagus.  Fry (stirring occasionally) over a medium heat until the asparagus is softened; approximately 3 to 5 minutes.  Add chopped bacon, dried figs, whole pumpkin seeds [set 1 tablespoon (finely chopped) aside and use as topping for scallops], and goat cheese to the skillet, fry until goat cheese is melted; approximately 2 minutes.  Remove pan from heat.

Remove the bread from the oven and arrange them on a serving platter. Spread the vegetable mixture over the 12 bread slices, distribute the topping as evenly as you can.  Remove scallops from grill and plate over white wine sauce.  Baste scallops with butter and top with pumpkin seeds and pumpkin spice.  Serve immediately with asparagus and veggie bread.

Pat yourself on the back, pour the wine, and enjoy!

My Meals are on Wheels

Life and Cooking from a Wheelchair

Travel & Lifestyle - Come and Disover the WORLD with me!

“Poetry is a deal of joy and pain and wonder, with a dash of the dictionary.” - Kahlil Gibran

Poetry and Paintings by Niharika Jaiswal

Just exploring what it is to be human.

Never worry about where to eat again!

If I knew you were coming I'd have baked a cake...

Thinking with my Fingertips

Cooking with a Wallflower
quiet and creative

Diary of the creation of Bluestem Pond Farm